I (Irina Beloozerova) suggest that you browse at least 1-2 of our papers while paying close attention to the Methods section. Free links can be found here. This will answer many questions about how our data was collected.

1) We recorded from chronically implanted awake freely behaving cats.  Cats were trained to either walk in a chamber or a treadmill, or balance on a tilting platform. Dimensions of those devices can be found in our published papers, and are also described in one of the next tabs.

Critically important information on HOW we trained cats to walk and balance can be found in the book of Karen Pryor “Lads before the wind” (first edition is best). We used “clicker training”. My guidelines to my students are here.

4) We used FHC electrodes or Thomas Recording electrodes. See our comments on electrodes in one of the next tabs. We used custom pre-amplification. It is described here.

5) We used Spike2 (CED, UK) to control experimental devices, record data, monitor data collection, “cluster” spikes, and preliminary analyze data. My comments on spike clustering can be found in one of the next tabs. It is critically important for interpretation of the data that you understand clustering.

6) We used custom Matlab code to analyse the relationship of neuronal spiking activity with strides. The code can be found in one of the next tabs.

Read Methods section of the papers below first, then, if still needed, read Methods in other papers, or contact Irina Beloozerova using the link on the top of the page.

All tasks that cats performed during our experiments are described in great detail in the published papers. Below are summaries and specific references.

Ladders. Ladders were made of wooden planks. They were reasonably light for people to move around, but heavy enough to not to move under the walking cat. Crosspieces  of the ladders had flat tops. They were covered with the same material as the surface of the corridor without obstacles, the “flat surface corridor”. On the ladders with stationary crosspieces, the crosspieces were positioned 25 cm apart. This means, that for a ladder with 5 cm wide crosspieces, the width of the gap between them was 20 cm. The gap between crosspieces 12 wide was 13 cm, and that on the ladder with crosspieces 18 wide was 7 cm. There was 11 crosspieces on each on the ladder allowing the cat to make 4 or 5 steps, depending on which foot the cats started the ladder with. We did not train cats to start with any particular limb, but when walking in the same direction around the chamber, they typically choose to start on the ladder with the same limb. Most cats preferred one direction of walking, so the ladder data are quite consistent in regard of which foot was the first on the ladder. The elevation of the tops of the crosspieces above the floor of the corridor was 6-7 cm. Cats easily could step in-between of the crosspieces, but, after some runs, always chose to walk on the tops, and never reverted to treating the ladder as a series of obstacles, unless they were sick or we inter 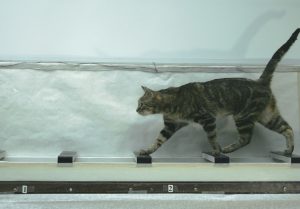 vened with their visuo-motor coordination. Stationary ladders are described  in many of our publications, the basic references are:

Ladder with moving rung. The ladders with a pre-displacable crosspiece were identical to the ladders with stationary crosspieces except rung #7, as counted from the perspective of the cat walking along the ladder, that was attached to a motor. The motor and the pulley were positioned in-between crosspieces # 5 and #7, but were below the level of the crosspieces. In experiments with these ladders, cats were only rewarded with food for walking along the ladders in the direction that resulted in the movable rung to be #7 on the path, and they nearly always did so.

Walking up- and downhill

Avoiding small obstacles. Cats walked in a chamber that had a 250 cm long and 25 cm wide test corridor. An external wall of the corridor was made of a transparent plastic, which permitted visual monitoring and recording of the walking cat. 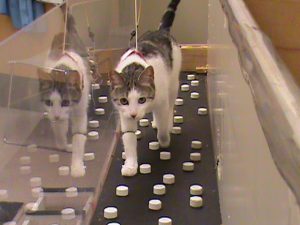 During each recording session, a cat walked in both unobstructed corridor and in the same corridor obstructed with small objects. A single white wooden obstacle of 1 cm in height and 2.5 cm in diameter was the simplest obstruction. It was placed on sites whether the cat would normally step when walking in the unobstructed corridor. We determined that by letting the cat to walk 12-24 times along the unobstructed corridor at the beginning of the recording session while we took notice of where its right fore-paw stepped. Then we placed the object on one of these sites, and the cat continued to walk along now obstructed walkway. During other recording sessions, we placed many such objects on the floor, regardless of where the cats stepped normally, and let it make its way through them. A computerized, active-marker three-dimensional real-time motion capture and analysis system Visualeyez (VZ-4000, PTI) was used to record the cat’s movements while it passed through the test corridor. See Visualeyez page for more information. Results of these experiments were published in Chu MI, Seto SH, Beloozerova IN, and Marlinski V. Strategies for obstacle avoidance during walking in the cat. J. Neurophysiol., 118(2): 817-831, 2017. PDF

1) Most of our recordings were obtained using single-unit tungsten varnish-insulated electrodes. Before the year 2000, we manufactured them in the lab, and I am happy to share my knowledge with anybody interested. Now, however, I recommend that you save your time and buy electrodes. At least some of commercially available electrodes are of a decent quality and are cheaper than your time. Since year 2000, we used single-unit tungsten varnish-insulated electrodes from FHC. Not all FHC electrodes that we tried were good for our purposes, but eventually we learned how to order electrodes that work well for recording of the activity of large and medium size neurons in the freely behaving cat.
The good selections for the FHC electrode are highlined in yellow on the FHC order selection form:  https://catbrain.blob.core.windows.net/catbrain/2017/Database/Technology/Metal(UE)SpecSheetFHC_ib.pdf
There is one thing that is  important to note here: the impedance that FHC lists (position 7) is not practically correct. These electrode are not 13-15 MΩ, functionally, they are like 1-2 MΩ. I never actually measured their technical impedance, because the FHC impedancemeter that we bought in 2005 or so was totally useless. It passed way too much current, so in seconds, electrodes impedance would drop to 100-200 KΩ, and they would behave as such in the brain. So I’ve stopped measuring, and just kept buying electrodes with higher and higher stated impedance until they were good for our experiments.

2) We recorded smaller neurons, such as cortico-thalamic projection neurons of layer 6 and cortico-cortical projection neurons using platinum (95%)+tungsten (5%) electrodes insulated with quartz glass. In 2000, we purchased $2000 worth of 40 μm glass filament from Thomas Recording, the smallest volume they would sell at that time, pulled some the filaments to fine tips using their puller (a friend had one in his lab), and sharpened the electrodes on a home-made diamond grinder.  Now almost 20 years later, we still have most of the filament. We only pulled two times so far, while visiting that friend’s laboratory. One does need a special puller to pull quartz glass. On each visit, one person (IB) spent about a week to work out the regimen and then pull enough electrodes to last next ~10 years. Grinding was not of any particular difficulty and did not take much time (15-20 min per electrode).

There electrodes are practically indestructible, I mean, in careful and experienced hands. We used some of them for months in everyday experiments. The most typical way to loose such electrode is to drop it on the floor and fail to find. These electrodes minimally damage the tissue, so that neurons on a track can be still recorded after a good number of passages with the electrode, and often same neurons can be identified and recorded on multiple days. The drawbacks are: (i) these electrodes would penetrate only a thin layer of connective tissue, and (ii) they bend rather easily, so they would only travel without any significant deviation from the intended track for ~5 mm. We have also used electrodes made from 80 μm filament, but they did not offer any appreciable advantage over 40 μm ones (were still hard to see and feel), while making twice as large tracks in the tissue.

Description of HOW we used the electrodes with our manual home made drives on our cat head implant can be found here.

Collision test determines if a response of a neuron is antidromic, i.e., the neuron responds because its axon is stimulated.

From Karayannidou et al. Activity of pyramidal tract neurons in the cat during standing and walking on an inclined plane. Journal of Physiology (London), 587, 3795–3811, 2009.

NOTE: It is critically important for excitation of thin axons that the DENSITY of the current is high. Sufficiently high current density is achieved by passing it between small closely positioned electrodes. See explanations in e.g., Swadlow HA.  J. Neurosci Methods., 79(2): 131-141, 1998. We typically used 120 μm wires in Teflon insulation that had 0.4 mm exposed tips; we positioned the tips 1-1.2 mm apart. NOTE: the insulation MUST be good, to not “leak”.

Classification of spikes as to be discharged by one, two, or more neurons is never 100% accurate. There are several reasons for this.

Second, the amplitude and shape of the spike in the record first and foremost depends on the location of the neuron in respect to the  electrode, not on the neuron’s firing properties. The amplitude and shape of the spike also of course depend on filtering and amplification of the signal. For neurons recorded on the same channel, those will be identical, but not necessarily so for neurons recorded on different channels or recorded during different sessions, please keep this in mind.

Third, there is always electrical noise in the record, and it distorts the amplitude and shape of spikes making them even more variable.

Fourth, spikes of many neurons are very similar to each other.

Thus, It is practically impossible to tell between discharges of a single neuron and those of a couple of neighboring neurons by simply classifying waveforms (sorting spikes) from a record obtained in the absence of any stimuli, no matter how versatile the classification is.

Is it always necessary to tell neurons apart?

Well, I like it very much to be able to, but I can [reluctantly] agree that, for certain evaluations of brain activity, it might not be absolutely necessary, although some degree if neuronal specificity, in my opinion, is ALWAYS necessary.

Matlab program (actually a set of programs) to analyze phase distribution of spikes of a neuron in respect to stride cycle can be found here.  (This program might mind the version of Matlab it is run on.)